Dan Weaver, CEO and game creator of KnightWeaver Games, has hit a sweet spot in the world of gaming with two related card games - Patchwork and Patchword. It's that combination of luck, skill, and purely random events that happen when there are enough people playing to make the future unpredictable.

Both games are played with cards that have different fronts and backs - letters in the case of Patchword, and designs in the case of Patchwork. In both games, players make sets (or spell words) by swapping, flipping, and trading cards. The following videos feature an interview with Dan about how the games were developed, and then how to play each game.

You can purchase Patchwork and Patchword at PlayFair Toys.
Here's the video of Dan talking about how he came up with the game ideas:
Here's how to play Patchwork:
And here's how to play its cousin PatchWord:
So if you're looking for something new and different, these games are both very addicting and loads of fun.
Posted by Professor PlayFair at 8:56 PM 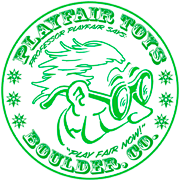